Archery is magical. Can you remember that first bow you made as a kid, the one who sent your roughly made arrow in among those trees, never to be found again? I do. However, I got into modern competition archey in my teens and with those glass fiber bows, the magic just wasn’t there for me. But I picked it up again as an adult and quickly gravitated towards making and shooting traditional wooden flatbows and longbows.

Before I move on, I must admit that I was in doubt on this one and if you argue that the second most important Viking skill (after making fire) is hunting in general, I’ll probably agree. But I love archery and it was likely one, if not the most important way of finding that food in the Viking age (and long before that, obviously). There were other ways to find those amino acids as well, like fishing, catching animals with snares and obviously from harvesting crops and slaying some of your poor farm animals. But archery is not only a useful hunting skill, it was also probably your preferred way of self defence. Close combat is ugly, and even if you managed to kill your opponent, if you got injured, you could easily die from the following infection.

So the ability to make a bow, string and arrows, and to send those arrows into living creatures, was a skill you had to master. I believe this was not only a man’s skill – women too had to be able to fend for themselves, and to hunt, in times of emergency. And from my experience, life is full of such times.

I believe that almost every man and woman in the iron age knew how to make a decent bow. It was a common tool and there was nothing fancy about it. It was probably something you just had to have, like most people today have a cell phone. You would probably learn how to make it from a relative, and the craft of feathering and straightening arrows was probably something you saw most evenings by the hearth in your longhouse. You would learn how to find the right trees, how to work the wood, how to make a string and so on. Already as a child, you would know how to hit your target, and also that which is most important for an archer: When not to let that arrow fly. If you lose an arrow, that means lots of work to make a new one. Trust me, I have learned that the hard way…

Let me just add that if you haven’t already tried traditional archery, I think you should. If you also make your own bow and arrows, you will find it is self reliance in its purest form. It could also make you connect with yourself in a very powerful way.

So there you have it, Viking skill #2. Thanks for reading this blog, and may your arrow always find its target. 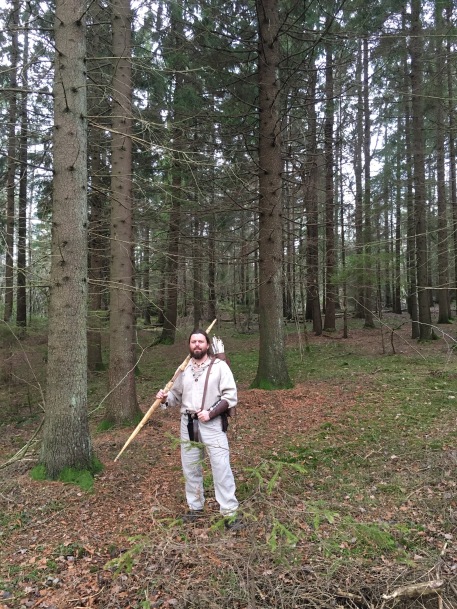