When Ragnar Lothbrok is your forefather

I recently found out I have Viking ancestors. I know – many people do. If you live in Scandinavia or have relatives from that part of the world, there is a good chance that you have Viking genes too. But still, I was extremely excited when I found out about this. It seems my ancestry can be traced back to the Danish chieftain Skjalm the White, who himself had a very famous grandfather: Palnatoke. Now, this was a very long time ago and I wouldn’t say this is an exact science. However, we do know that Skjalm was born in AD 1034, and that he was a very real person. His grandfather, on the other hand, is more of a mythic figure. Nobody really knows if Palnatoke was a real person. But he is said to have established the brotherhood of the Jomsvikings, an independent army of elite Viking mercenaries. He also killed the Danish king Harold Bluetooth, whose son he had fostered. Young Sven Forkbeard was happy to seize the throne and would become one of the most notorious Danish Viking kings of all time.

Being a novelist with a lifelong fascination of the age of the Vikings, I am obviously very excited about all this. That said, I have always thought that the real heroes of the Viking age were not the kings, but the farmers, the fishermen, the craftsmen, the slaves; the men and women who struggled to feed their children and to keep a roof over their heads. But anyway, when I look at those lines going back through generations, all the way back to Ragnar Lothbrok and Hrothgar … It gets you thinking, if you know what I mean. Do I have some of those genes? If so, do they affect how I behave, how I think? Do they affect the way I write my books? I would like to think that they do. 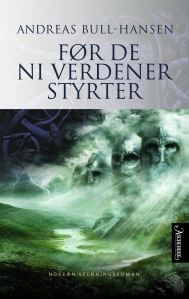 One of my novels, “Before the Nine Worlds End”, soon to be translated into English.

and will also be available in:
Russian
Spanish
Hungarian

Order my novels using THIS LINK or the direct link to your language in the list above. You can also get them in any other bookstore.

HOW TO MAKE A DONATION:

Please note: Sharing to social media is always welcomed, so please do share links to these blogpost as much as you like! You'll find share buttons under each blogpost. However, copying entire blogposts and pasting them into other websites will be considered a violation of Bjørn Andreas Bull-Hansen's copyright. That said, if you wish to use any of these blogposts on your own website, please contact me.
%d bloggers like this: